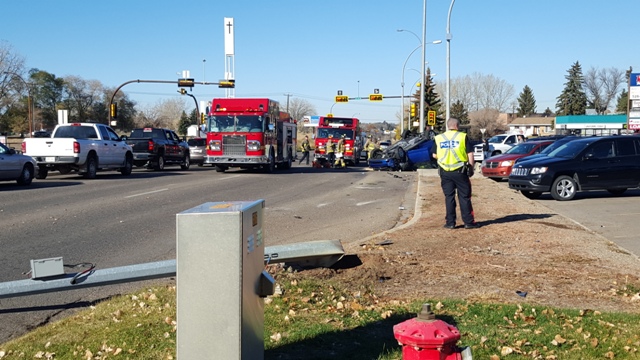 Police, Fire and EMS responded to a single vehicle rollover on Dunmore Road just south of 22 St SE. Just before 1:00 pm yesterday A blue SUV was travelling northbound on Dunmore Rd in the right lane when the 47 year old male driver went into medical distress and struck a lamp standard. The force of the impact caused the vehicle to flip on its roof and slide about 18 metres coming to rest near a bus shelter. The male was transported to hospital by EMS for further medical assessment and observation. The driver was wearing his seatbelt and that prevented him from being seriously injured. No charges are being considered by police at this time. Police estimate total damage at about $25, 000.  Northbound Dunmore Road was closed for about three hours while police investigated and city crews cleaned up the scene.