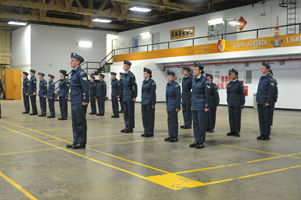 Members of the local air cadets have wrapped up another year of training. The 15 Air Cadet Squadron held their annual review yesterday and recognized members for their growth through the year. Following the ceremonial parade into the Cypress Center yesterday afternoon, the cadets were inspected by Captain Scott Payne of the Southern Alberta Light Horse Regiment. Awards were also handed out to the cadets for everything from perfect attendance throughout the year to marksmanship. Cadet Warrant Officer Jason Iverson received the Lord Strathcona Medal, the highest award that can be earned by a cadet.